The organization chart below illustrates how regional VTOL safety teams and global VTOL stakeholders will use the VAST organization to collaborate on improving the safety of vertical flight. 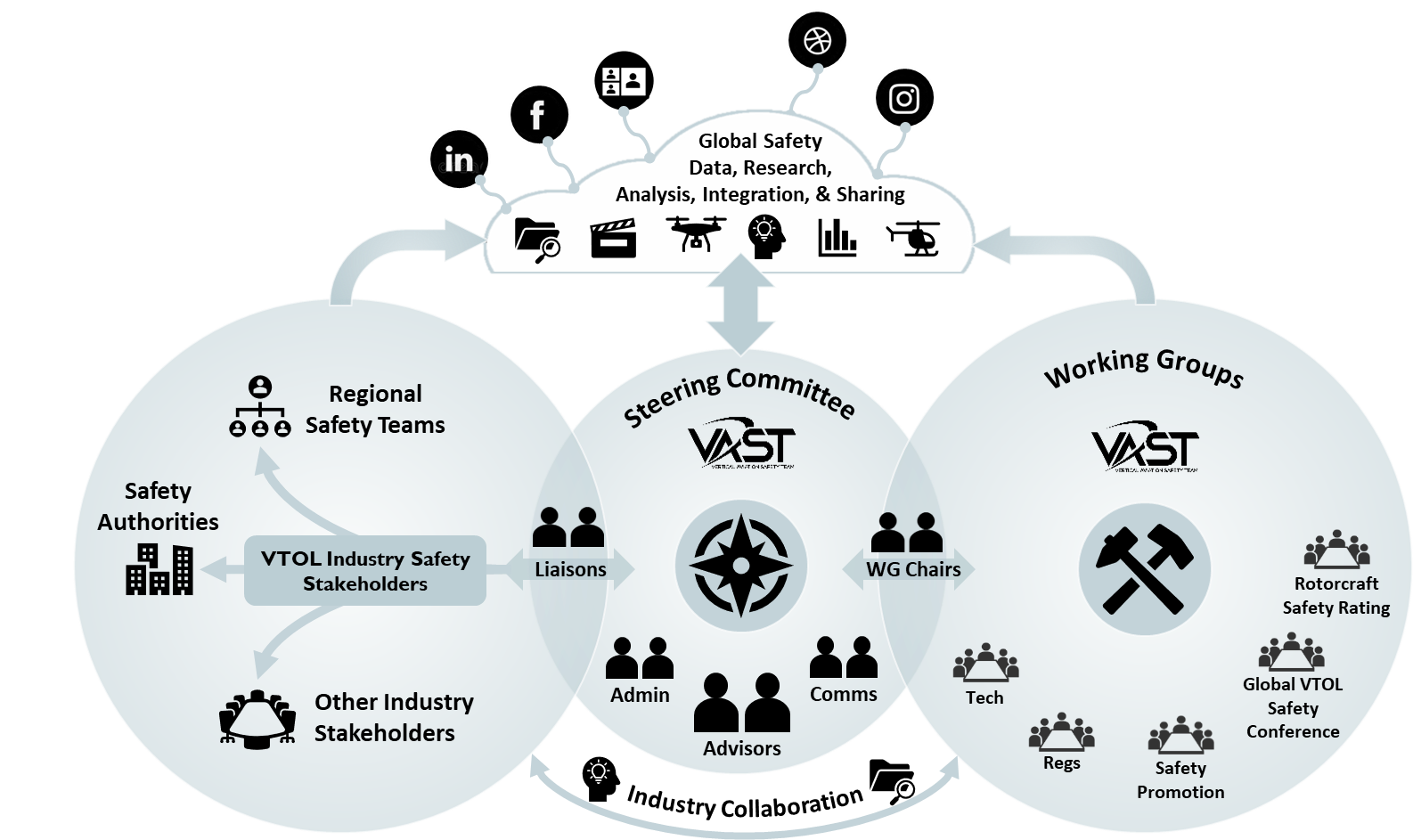 In the past, international aviation safety information has tended to stay within separate organizational and national silos. VAST intends to break down these silos so that aviation safety information can flow freely globally. To achieve this end, VAST is engaging its regional safety teams to receive, integrate, harmonize, and distribute aviation safety data, programs, and recommendations worldwide. Additionally, VAST serves as an arbiter between the regional safety teams to ensure collaboration on and coordination of these initiatives, as well as the sharing of final output.

For a more complete summary of the VAST organization, please review the VAST Introduction presentation. 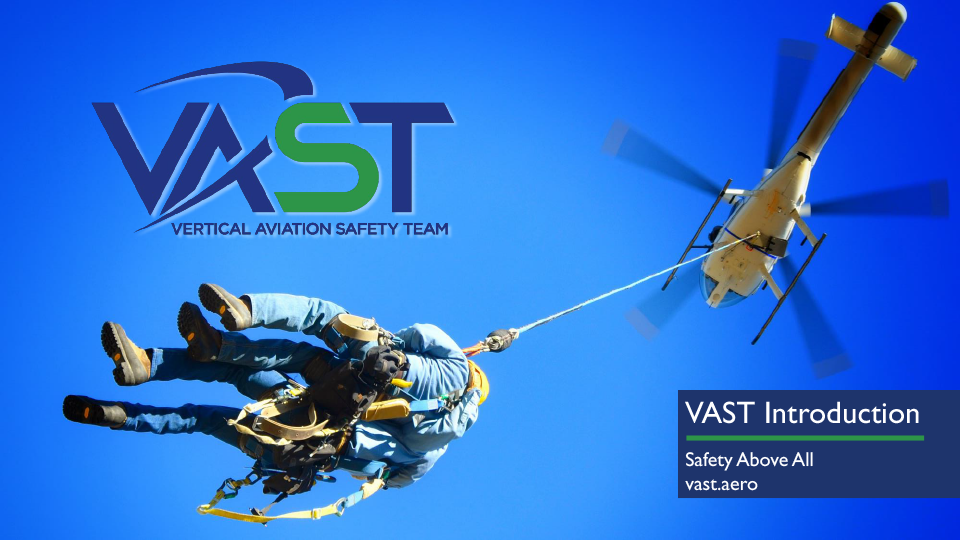 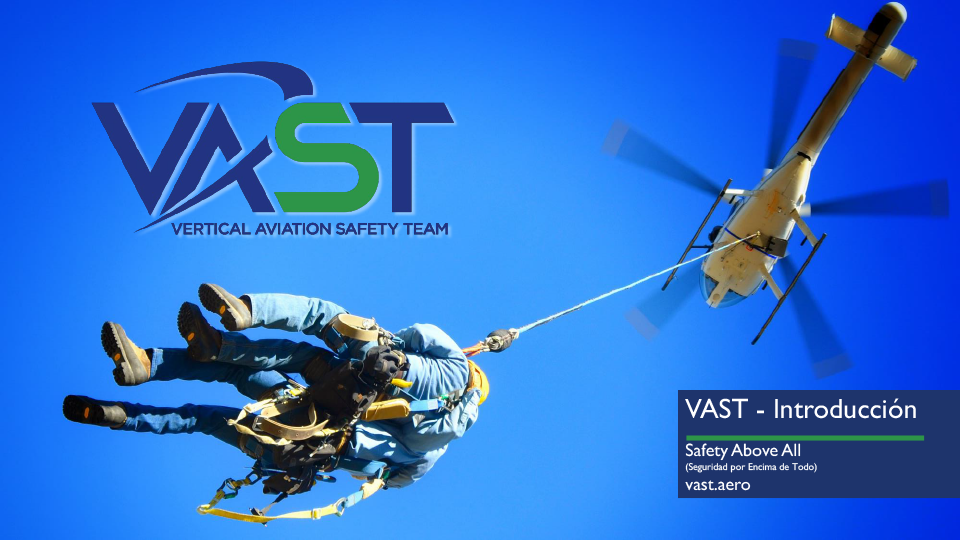 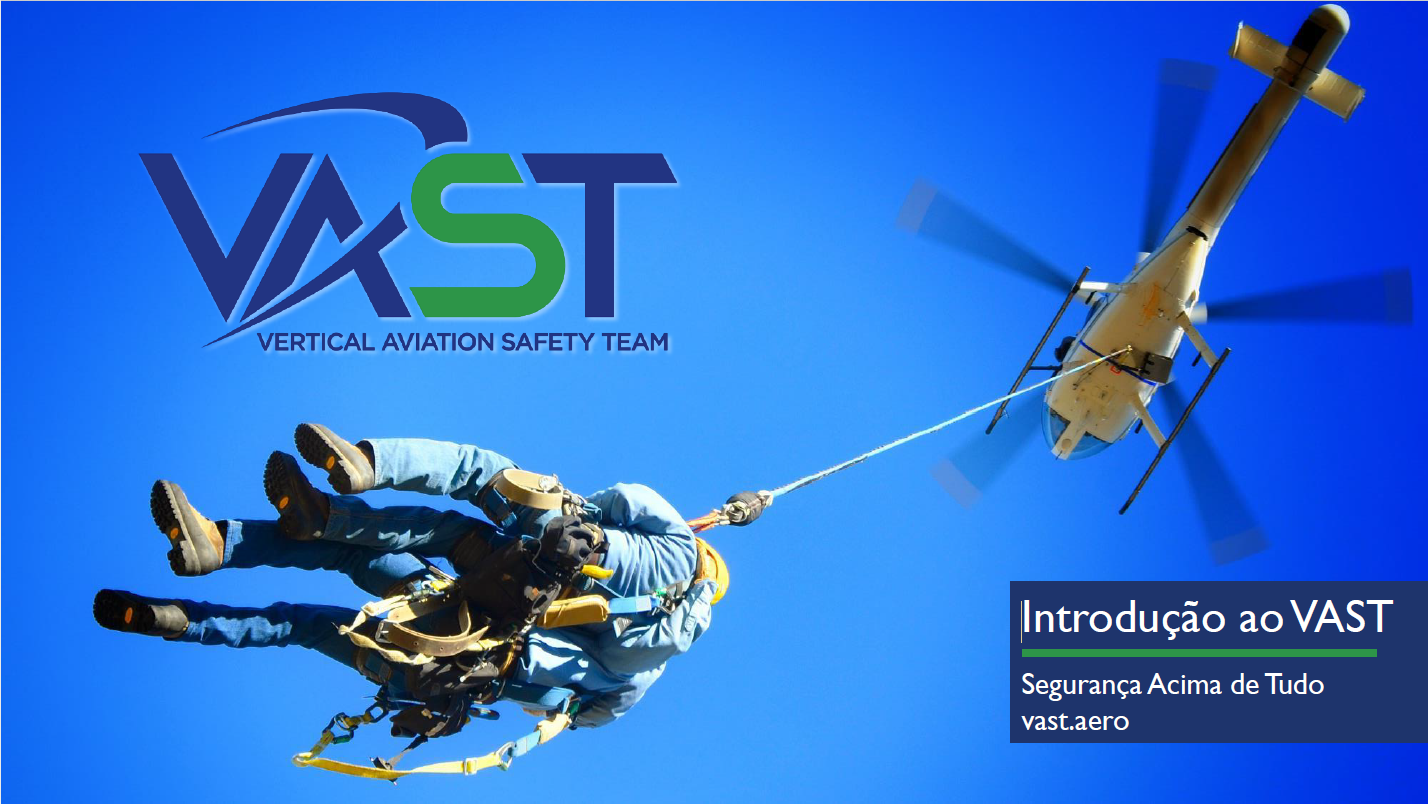 In its strategy for enhancing operational safety in vertical flight, VAST:

In 1997, the White House Commission on Aviation Safety and Security set a 10-year goal of reducing the US fatal aviation accident rate by 80%. At the same time, the commission identified the need for strong government–industry partnerships to support the aviation system of the future. This effort resulted in the organization that became the Commercial Aviation Safety Team (CAST), which focuses on commercial air travel.

In the past 16 years, IHST/IHSF has grown to be a globally recognized organization dedicated to the advancement of safety in the global helicopter community. The IHSF’s regional teams have contributed in a very significant way to the development and promotion of safety and the sharing of safety information between and within countries from around the world.

Recent global changes to the complexion of the vertical flight community and the future of vertical takeoff and landing (VTOL) aircraft, including the coming of age of civil tiltrotor technology and, soon, autonomous passenger- and cargo-carrying VTOL operations, necessitated the rebranding of the IHSF once again. To expand its public–private efforts and to enhance worldwide flight operational safety in all segments of the vertical flight industry, in 2021 the foundation organized under a new charter and became the Vertical Aviation Safety Team.

We use cookies on our website to give you the most relevant experience by remembering your preferences and repeat visits. By clicking “Accept”, you consent to the use of ALL the cookies.
Cookie settingsACCEPT
Manage consent

This website uses cookies to improve your experience while you navigate through the website. Out of these, the cookies that are categorized as necessary are stored on your browser as they are essential for the working of basic functionalities of the website. We also use third-party cookies that help us analyze and understand how you use this website. These cookies will be stored in your browser only with your consent. You also have the option to opt-out of these cookies. But opting out of some of these cookies may affect your browsing experience.
Necessary Always Enabled
Necessary cookies are absolutely essential for the website to function properly. These cookies ensure basic functionalities and security features of the website, anonymously.
Functional
Functional cookies help to perform certain functionalities like sharing the content of the website on social media platforms, collect feedbacks, and other third-party features.
Performance
Performance cookies are used to understand and analyze the key performance indexes of the website which helps in delivering a better user experience for the visitors.
Analytics
Analytical cookies are used to understand how visitors interact with the website. These cookies help provide information on metrics the number of visitors, bounce rate, traffic source, etc.
Advertisement
Advertisement cookies are used to provide visitors with relevant ads and marketing campaigns. These cookies track visitors across websites and collect information to provide customized ads.
Others
Other uncategorized cookies are those that are being analyzed and have not been classified into a category as yet.
SAVE & ACCEPT